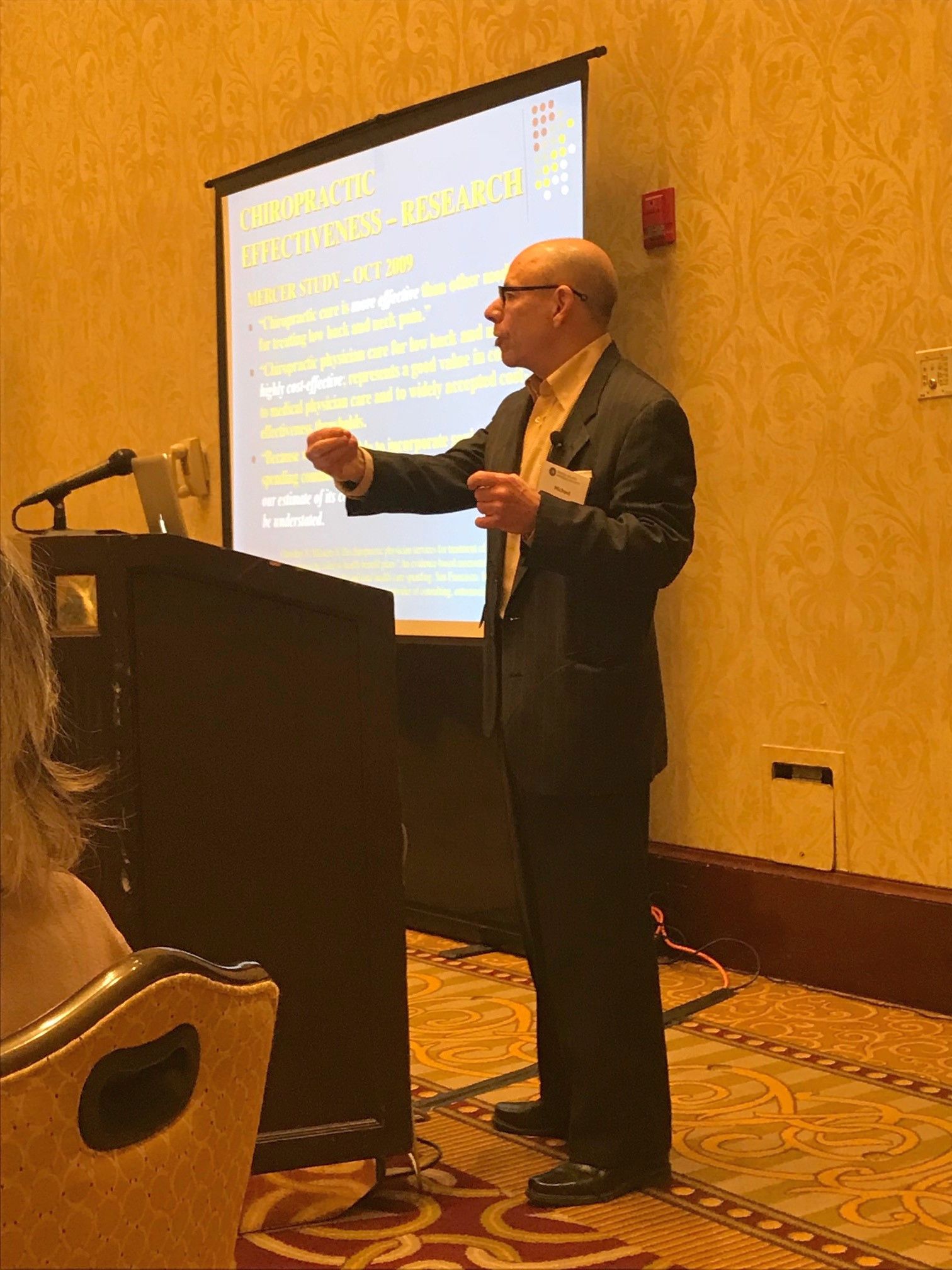 When it comes to the opioid crisis, one of the more disturbing facts is how many of those individuals who are addicted started out merely by taking painkillers prescribed by their physician. Finding alternatives to opioids was the theme of a continuing education session held by the Rhode Island Medical Society on March 24 at the Crowne Plaza Hotel in Warwick, RI. Three chiropractors from the Chiropractic Society of Rhode Island, one of the oldest chiropractic associations in the United States, presented on chiropractic as a viable alternative to prescription painkillers.

“By its nature, chiropractic is a preventative form of medicine. Regular spinal adjustments can minimize and prevent issues from escalating and becoming bigger problems down the road,” said Dr. David Dwyer, one of the three CSRI speakers and the organization’s current president. “Somebody seeing a chiropractor will gradually be minimizing and hopefully eliminating their pain so they don’t feel the need to take the prescribed painkiller after so many visits. Conversely, the patient treating their back pain only with pain pills will most likely run out of refills and then what?”

Dr. Dwyer is the principal and primary practitioner at Tollgate Chiropractic in Warwick and Wakefield, RI. His fellow presenters included past CSRI President Dr. Michael Gottfried of Aquidneck Chiropractic in Middletown, RI and CSRI member Dr.Angela Ciresi of East Greenwich.

“In addition to preventing addiction, chiropractic has also been effective for some patients who were addicted to painkillers but were able to wean themselves off that medication through regular spinal adjustments, massage and exercise therapy,” said Dr. Gottfried.

According to the American Society of Addiction Medicine, of the 21.5 million Americans age 12 or older who had a substance use disorder in 2014, 1.9 million had a substance abuse disorder involving prescription pain relievers. In fact in that same year, at least half of all U.S. opioid overdose deaths involved a prescribed opioid. In 2014, more than 14,000 people died from overdoses involving these drugs, with the most commonly overdosed opioids -- Methadone, Oxycodone (such as OxyContin®), and Hydrocodone (such as Vicodin®).

“Loss of life to opioid addiction is tragic, there’s no denying that but even less extreme cases of opioid use and abuse have consequences,” adds Dr. Gottfried. “The newest estimates on the cost of opioid abuse to U.S. employers are estimated at $18 billion in sick days, lost productivity and medical expenses.”

In addition to partnering with doctors from a number of alternative specialties as well as primary care physicians, CSRI started a grassroots movement that includes the distribution of information to patients and other interested parties. The Society has also set up a speaker’s bureau where chiropractors will speak to local businesses and civic groups on chiropractic as an alternative to prescription pain killers.

“The scary part of the opioid epidemic is that it could happen to any of us who trust that pain killers prescribed to us will not harm us,” said Dr. Dwyer. “Unfortunately, that’s not always the case. That’s why the best course for pain is to treat it naturally with chiropractic.”

To arrange for a chiropractor to speak to your group, contact CSRI at 401-207-0700 or e-mail [email protected]. To find a chiropractor in Rhode Island, you can go to www.richiro.org.

Founded in 1918, CSRI is one of the oldest chiropractic associations in the United States and represents almost half of the chiropractic physicians in the Ocean State. In addition to providing a regional voice for chiropractors in the business and legislative arenas, CSRI also helps educate the general public on the benefits of chiropractic. Those all-natural benefits can include relief from headaches, asthma, osteoporosis, osteoarthritis, carpal tunnel, colic, and stress, just to name a few. The Chiropractic Society of Rhode Island is located at 1272 West Main Road, Building 2, Middletown, RI 02842. For more information, call (401) 207-0700 or visit www.RIchiro.org.